Twitter has been successfully provoking us to consciously think of language singe 2006. Originally restricted to 140 characters, it is an aphorisms machine for witty remarks and social criticism, or at least it should be. Tweets still trigger our creativity in the use of language and prove that less is more, even though the number of characters doubled in 2017.

The correlation is obvious: tweets should be chirpy and melodic, just like a bird’s tweet. Still, one should not underestimate the power of language and the ways it may be (mis)used.

Tweets are often emotionally charged and provoke communication in return. This is because the language used on Twitter largely resembles speech. In fact, stuffing thoughts into 280 characters (or less) has resulted in new micro-messaging mechanisms that push language to its limits.

Being spontaneous and creative with language is the first step towards creating engaging tweets. And equally important, never underestimate the reader.

Crafting “re-twittable” content is an art in itself but it can be boiled down to providing something of value in a most unexpected and creative way. Most importantly, tweet at the moment. Twitter reflects life in real time and the best time to replicate experiences is to share them online simultaneously.

The playfulness with language and good use of ambiguities in meaning is obvious. Also, notice the use of the short form of until in the second sentence. It saves characters and sounds more natural.

Always have in mind that people use social media networks to stay connected and informed but also to find entertaining content. Humour always works on social media because it adds a human touch and promotes open communication. Regardless if you are running a personal or a business profile, consider humor in your tweeting endeavours.

Have a look at the example below: 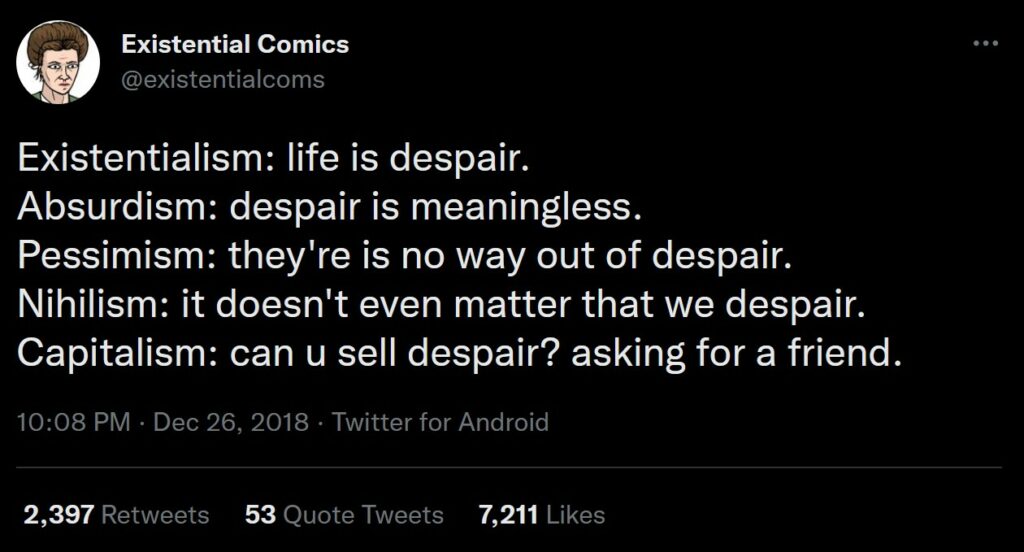 The tweet combines social criticism and humor in a minimalist framework. It sounds bittersweet but it provokes engagement because people can easily relate to the downside of capitalism. Plus, the repetition of the word ‘despair’ adds to its musicality and folly. And the ending is unpredictable.

The tweet has more than 11,000 interactions, suggesting that you do not have to crack the Twitter algorithm to create an engaging content that will become “re-twittable” and viral.

A piece of advice:

When tweeting, remember the 20 characters rule.

When a tweet is retweeted, the retweeter’s username is added at the beginning of the tweet. This adds some extra characters and if you already have +260 characters, it will be impossible to retweet. It is only possible if the user edits the original tweet, which is not something that any tweeter would like.

So keep in mind 20 characters as a magic number that will make sure your tweets are “re-twittable”.

In the end, be brave with language – Twitter is a solid soil for linguistic innovation and, as such, it offers endless linguistic opportunities.

The casual expression will remain to be the voice of communication on Twitter and the best way to retain its chirpy and creative nature is to take and make the most of the 280 characters you have at your disposal.